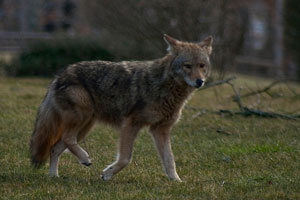 Facts About the Eastern Coyote in Massachusetts

The Eastern Coyote typically weighs between 35 and 40lbs.  The color of the coat varies from a grizzled gray, a grayish tan, a reddish blonde to a charcoal black.  They are often described as looking similar to a poorly fed German shepherd but coyotes usually carry their tails low to the ground whereas a German shepherd carries its tail high.

Eastern Coyotes are often found in suburban areas where food is most plentiful.  They are scavengers and will eat anything from small rodents, trash, pet food and even small pets.

Keeping Coyotes Away From Your House, Tips from MassWildlife

Secure your garbage in barrels with tight fitting lids
Do not feed or pet them
Keep your pets secure, particularly small pets that are a potential food source.
Keep bird feeder areas clean as the seeds attract small animals on which they prey
Feed your pets indoors
Close off crawl spaces under porches and shed which can serve as resting areas
Don’t let them intimidate you and don’t hesitate to scare or threaten them off with loud noises, bright lights, throwing a tennis ball or spraying with a garden hose
Protect livestock and remove fallen produce
Educate your neighbors on the steps they can take

Coyotes as a Threat

If an immediate threat exists to human life and limb, public safety officials (animal control officer, police officers and the environmental police) have the authority to respond and dispatch the animal, as stipulated in the Code of Massachusetts Regulations (CMR) 2.14 that pertain to handling problem animals.  This includes animals exhibiting clear signs of rabies.  If possible, MassWildlife should first be contacted to authorize the lethal taking of a coyote.  Again, the taking of small pets does not qualify as a threat to humans.

Coyotes help to keep the ecosystem in check.  Because they prey on small animals, they keep the number of rodents and woodchucks down.

Can a coyote be relocated?

No. It is against state law to capture and move coyotes simply because of their presence.  This law has been in affect for many years and is meant to protect both people and the animals.

How does one determine if a coyote is rabid?

The animal’s behavior will include, but is not limited to, convulsions, swaying or weakness, paralyzed limbs, rigid posture, disoriented appearance or a transfixed stare, drooling of saliva or frothing at the mouth, repeated yawning, extreme tense or alert behavior, awkward or uncoordinated movements, or hoarse vocalizations.

What will happen if one does feed or pet a coyote?

If one tries to feed or pet a coyote it will be come habituated.  When a coyote is habituated, it means that it has lost its fear of humans and will exhibit behaviors such as:
1) Does not run off when harassed,
2) Approaches pets on a leash, and/or
3) Approaches and follows people.
When wildlife exhibits these behaviors protective methods can be taken.

When a citizen calls the Brookline Police Dispatch Center (617-730-2222) reporting a coyote sighting or threat, a police officer will respond and assess the situation. The Massachusetts Environmental Police can also be reached 24 hours a day at: 800-632-8075.

Coyote Fact Sheet, including tips to keep them away from your home

Coyote Hazing Guide including tips on how to respond to coyotes

Massachusetts Division of Fisheries and Wildlife’s “Living With Coyotes” webpage

See what our officers are up to in the community.
KEEP INFORMED
Crime Reports

Submit a tip or view our interactive online crime map.
GET STARTED
[]